The Country where I was born


« Majestic Balkan,
At side the Danube turns blue
Thrace illuminated by the sun,
Under which Pirine blazes... »


The Republic of Bulgaria is located at the south-east of Europe and it occupies the north-eastern part of the Balkan Peninsula (22% of its surface). The Bulgarian territory has the form of a quadrilateral and covers a surface of 111 000 km² -- that is to say the 1/5th of the surface of France. 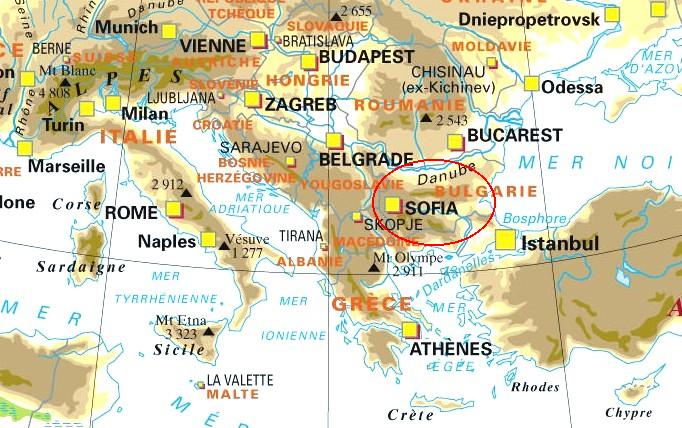 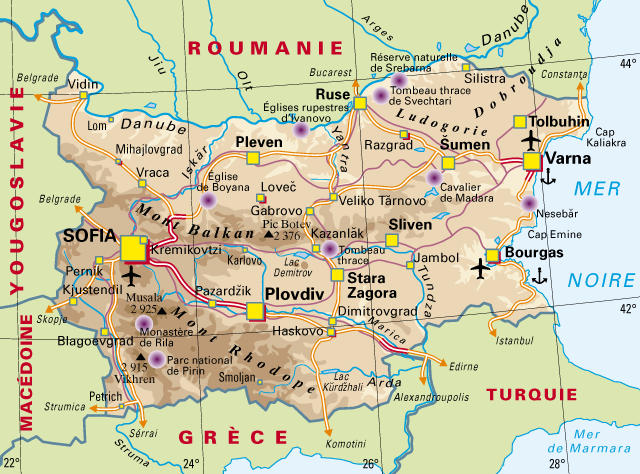 
By its borders, Bulgaria touches in north in Romania, from which it is separated by the Danube - second European river in length. In the west, Bulgaria confines in Serbia, in Macedonia, in the south in Greece and Turkey. In the east my country opens on the Black Sea.

The geographical situation of Bulgaria is in fact an international crossroads. It is crossed in diagonal by the railway and the motorway, which connect Western Europe to Middle East.

« The country which gave me birth » is endowed with a beautiful and varied nature. The high mountains with capricious summits alternate there with picturesque timbered hills, vast fertile plains, gorges and valleys. The average altitude of the country is 470 m. One distinguishes three great geographical areas : the plain of the Danube, Bulgarian mountains : Sredna gora, Rila, Pirine, Strandja planina, Vitocha, Luline, attached to two different systems - Balkan and Rhodope ; the south-eastern plain, including the basin of Maritza primarily, i.e. the plain of Thrace.

Each mountain delights the tourist by his unforgettable sites and the richness of its flora and its fauna. The Danubian plain, with the soft foothills, occupies the septentrional part of the country. The north-eastern part of Bulgaria is occupied by Dobroudja which looks like a steppe.In the south the Danubian Plain runs up against the ramifications of the chain of Balkan, which presents picturesque sites. The flat heat of Thrace, which extends to the south, gives in abundance vegetables, grape, cotton, rice, cereals. The plain of Sofia, where our capital is located, as well as the other plains of south-west, is circled by mountains.

Bulgaria is characterized by large variety of climates, because of its geographical position and with its extremely varied relief. Most of the country enjoys a moderate continental climate, more accentuated in septentrional Bulgaria, while the plain of Thrace and the frontier areas of the south, the climate has a transitional character between the continental European climate and the maritime Aegean one. The average annual temperature is of 12° approximately in January, and 22° in July.

Bulgaria has several hydrological resources, including many rivers and mountain lakes. In the east it is bathed by the Black Sea, in north by the Danube and it is criss-crossed by a dense network of rivers. The largest Bulgarian rivers are : Iskar (368 km), Maritza (525 km including 322 km in Bulgarian territory), Arda, (267 km), Strouma (392 km).

The vegetation in Bulgaria presents a large variety, since three climatic characteristics : continental, Mediterranean and steppe, meet there. One estimates to 3 200 the number of the vegetable species and at approximately 13 500 the number of the representatives of Bulgarian fauna. One can see there rare species, for a long time disappeared in the other countries of Europe. Everywhere grow more than 300 varieties of medicinal plants. There are 2 200 species of butterflies.

The population of Bulgaria exceeds 8 million inhabitants today. The Bulgarian people belong to the branch of Slavic of the south, which populated in antiquity the grounds between Oder and Dniepr, Carpathes and the Baltic Sea. The Slavics belong to the Indo-European ethnic group. While arriving in Balkans at the VI-th century, they assimilated Thracians which populated eastern half of Peninsula. Protobulgares, come from the Azov sea and pertaining to the turco-tatare group, were allied and formed together, in year 681, the Slavo-Bulgarian State. Protobulgarians were assimilated soon by the Slavics.

With regard to the composition of the population, Bulgaria presents a rather strong homogeneity. The Bulgarians constitute 88% of the population of the country, the Turks 8,5%, the Gypsies 2,5% ; there are still Armenians, Greeks, Russians, Jews, Tatares, Roumanians, Karakatchans (hellenized Thracians).


Dear Fatherland, Thou are the paradise of this world,
Your beauty, your charm are eternal.